20 years of Shopware: We look back and celebrate the anniversary

20 years of Shopware: We look back

Shopware's history - how it all began ...

Hard to believe, but true: Shopware has been around for 20 years now. Reason enough to reminisce about something. Are you already familiar with our founding history and what has changed since the beginning?

Early years: Founders at the age of 16

Already in his teenage years, Stefan Hamann was known for his enthusiasm and know-how of new computer systems and technology. He was the contact person of choice for many locals when computers failed to work as they should. His passion as a developer became a vocation - this became clear at the latest when he founded an IT company in 2000 at the age of only 16: Hamann-Media GmbH. 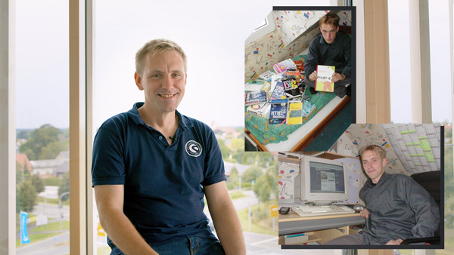 Shopware founder Stefan Hamann today and then. Already in his youth he was enthusiastic about programming.

Shortly afterward Stefan also brought his brother Sebastian on board. In this dynamic, Stefan was responsible for the technology and Sebastian for the design. The skills of the two brothers complemented each other so perfectly that their classic internet agency became increasingly successful.

In 2003, an order came in, which was a decisive turning point for their company: The Hamann brothers were to develop an individual shop system for www.arktis.de. Since the existing solutions on the market could not convince them, they developed a shop system on their own. This met their high demands on technology and design and at the same time set new standards. From this solution, they finally decided to market the system as a standard product - this was the birth of Shopware!

What has changed since the beginning?

The company can look back on enormous growth. Two employees have grown to become an international team of 200 people. To accommodate this growth, additional space for working had to be created time and again. The company has moved seven times within those 20 years; additional offices either purchased or built, aspects of buildings have been completely renovated, and finally a massive five-storey tower with a view of Schöppingen was built. Shopware has remained true to the roots of its rural home throughout: Who needs Berlin, Frankfurt or Munich when you can be surrounded by idyllic greenery from your office and watch the cows graze instead?

Back to the topic of growth and development: Only with sufficient space and the power of even more energetic, creative employees was it possible to make the product what it is today. The evolution from Shopware 1, through Shopware 2 and 3, to 4 and 5 - with all their patches, major and minor releases - was marked by years of work, countless lines of code, endless cups of coffee and numerous milestones.

When Shopware 6 was finally released last year, this was the beginning of a new chapter. The evolution from a shop system to an extremely future-proof ecommerce platform was complete.

But Shopware would not be Shopware without the most important thing: the community. Community feedback has always shaped the product and the roadmap. The Community Edition and the open source concept are a fundamental and integral part of Shopware's values.

A big THANK YOU to the entire community!

Whether you're a customer, shop owner, developer, partner, or colleague, you're all part of our community. For the past ten years, we've been gathering annually at Shopware Community Day to promote the exchange of ideas. Over these years, we've had the opportunity to experience unforgettable moments. This year – of all years – the 10th SCD is taking place under unusual circumstances, which unfortunately only allow the community to meet face-to-face in virtual form. Nevertheless, we want to say thank you.

Thanks for enriching us as part of the community! We’re proud to say that the spirit of the community has remained the same over all these years – we have encouraged one another with support, openness, ingenuity, and honest feedback. We continuously realise that the community also embodies our corporate values of "open," "authentic" and "visionary. We want to continue to adhere to these values with you in the future. We look forward to many more years of working and creating great things together!