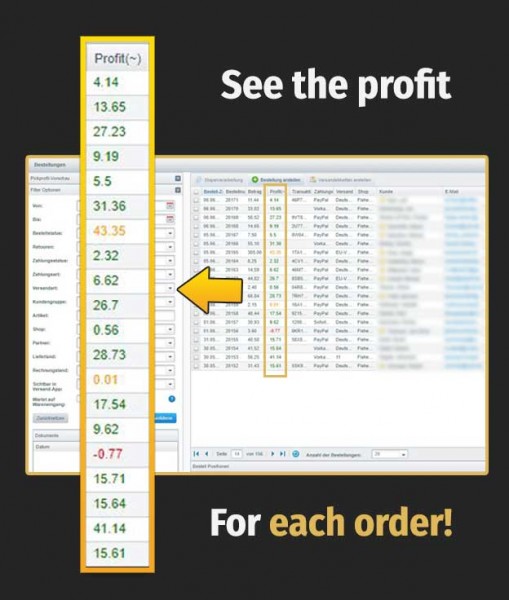 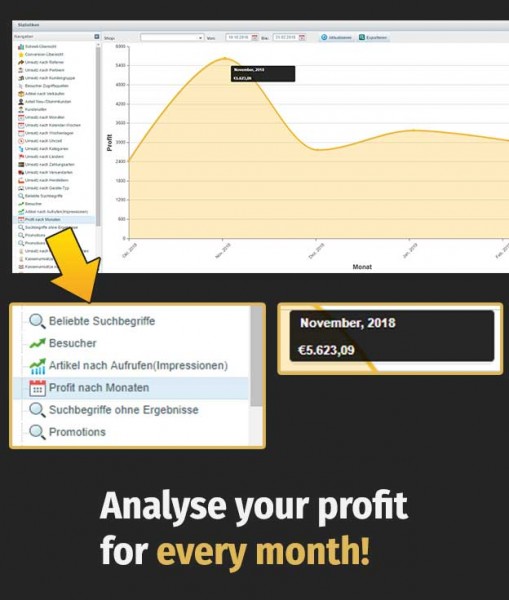 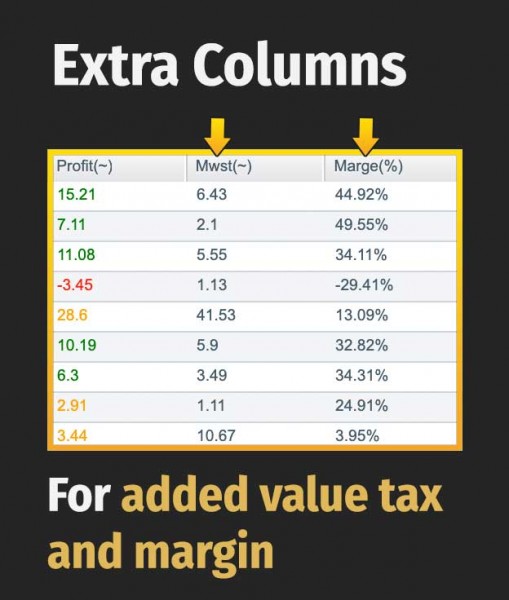 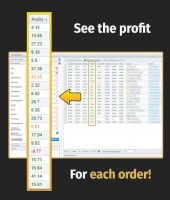 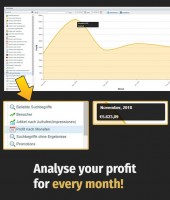 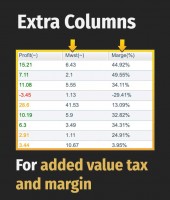 Description Reviews 3 Installation manual Changelog
Description
FAST OVERVIEW OF YOUR PROFIT Our plugin shows you the profit of your orders fast and... more
Close menu

FAST OVERVIEW OF YOUR PROFIT

Our plugin shows you the profit of your orders fast and uncomplicated and accumulates on the months clearly. Not only the purchase prices, but also payment costs (fixed and variable) and shipping costs are taken into account.

1. Shows you the profit per order

In the order summary our plugin creates another column with the profit per order. A simple traffic light system shows you how the profit ratio of your order are. In the default configuration, profits in the normal range (eg 35% of net sales) are displayed in green, outliers yellow and negative profits red.

2. Shows you the monthly profit in the evaluations

In order to determine the profit in the month, you simply go into the evaluations of your shop and select the tab "profit in the month". Now you can set the period over which you can compare the monthly profits. Easy and fast!

In addition, there are free text fields for payment and shipping options with which you can define further costs. In these you can specify values ​​that do not affect the customer but incur costs for you (Paypal fees or costs for packaging material, etc). These costs are then taken into account when calculating the profit. Language shops can be displayed separately in the evaluation.

Since the update 1.4.0 there is a separate menu for the plugin. Thus, for the most common shipping service providers (DHL, Deutsche Post and DPD) depending on product postage and extra costs.

Do not hesitate to contact us if you need help with one of our plugins.
alphanauten GmbH & Co. KG
Gürtelstraße 9
59423 Unna
MAIL technik@alphanauten.de
Reviews 3
Read, write and discuss reviews... more
Close menu

The Plugin is ready to go after you install it. You can adjust your costs for shipping and payment methods in the added free text fields. See the video with subtitles.

Need help with the setup ?!

Bug Fix:  Language shops can now be display separately in the statistics

Bug Fix: Analysis statistics now uses all subshops when looking at the span of one month

Release of the Plugin

(36)
ThemeWare Clean | Customizable Responsive Theme by TC-Innovations GmbH
With ThemeWare® you decide upon an extreme customizable and sales-promoting responsive Shopware Theme offering you a large range of functions in addition.
€ 397.00*
Self-Hosted
BUNDLE

(3)
Advanced Cart by shopware AG
With Advanced Cart, the focus rests on shopping cart personalization and socialization. This plugin
from € 30.00*
Customers also viewed

Admin Profit by alphanauten - Agentur...
With our analysis plugin "Admin Profit" you get a new Profit Module. Here you can easily see your Orders and their respective Profit. This also provides visual Feedback.
from € 28.00*

(4)
Advanced filter for administration (customers,... by codegiganten GmbH
With this plugin you can filter through all properties: it contains almost everything the database has to offer and will enhance your daily shopware administration!
from € 9.95*

(4)
Backend-Widget: Sales for month by mbdus
With this widget you get all sales for weeks and month on the desktop. In the plugin settings you can choose the amounts between with or without taxes.
€ 14.00*

(6)
Order and delivery countdown by Netzhirsch
Show your customers by what time they have to order so that the package goes out in the next dispatch aisle. And when it is likely to reach the customer.
from € 7.90*

(1)
IP targeting for sales channel, country or... by ACRIS E-Commerce GmbH
Using IP targeting or browser speech recognition, redirection to the appropriate sales channel with (default) country and the correct language is possible.
from € 19.99*
Self-Hosted

(3)
Profiler by Friends of Shopware
The Profiler shows informations like Timing of Events, Template Variables and more in a simple Toolbar. Furthermore all template blocks are printed in the rendered HTML as comment.
Free
Self-Hosted

PHPExcel library by Net Inventors GmbH
This plugin provides the PHPExcel / PhpSpreadSheet library for global use. After installing the plugin, PHPExcel can be accessed via a new Symfony service.
Free

(1)
Improved Import & Export by Firebear Studio by Firebear Studio
Import and export products from your Shopware store using CSV files with any required separators. Apply mapping to custom attributes to work with any data type.
from € 50.00*