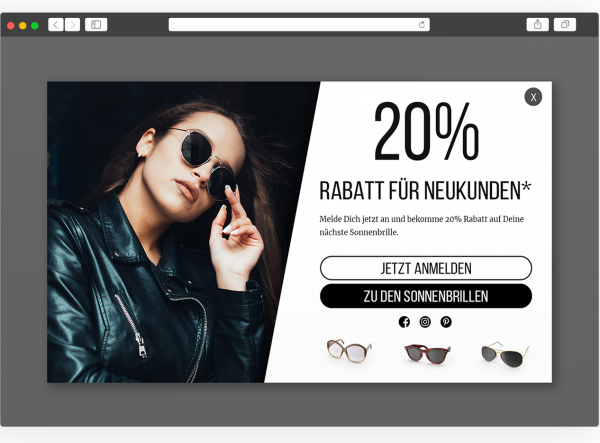 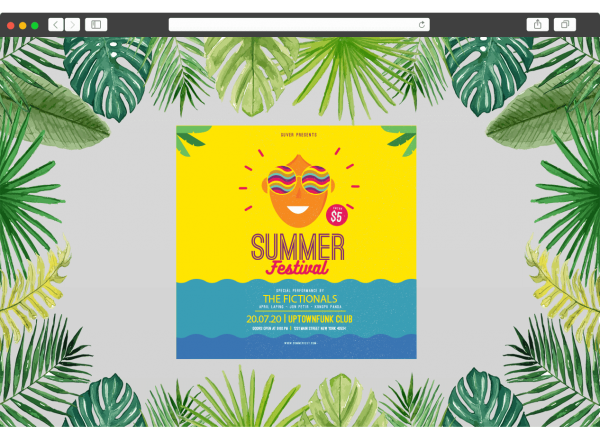 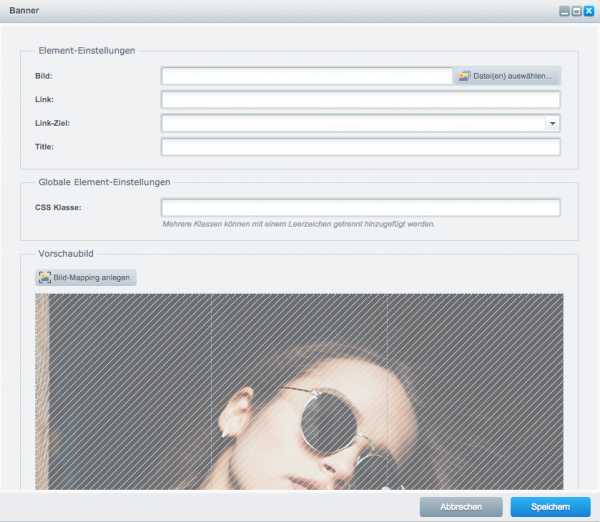 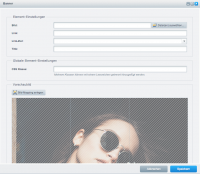 Description Reviews 7 Installation manual Changelog
Description
The shopwaretool for your individuell popup To display your popup as easy as never before in... more
Close menu

The shopwaretool for your individuell popup

To display your popup as easy as never before in any Emotion world.

Popups are still one of the most used tools to raise you sales. Finally there is a high-performance solution to present your products or discounts right where you need them. The plugin don’t have to be visible every time the costumer visits your website. With our popup plugin you can edit many different options to individualize your popup plugin like the cookie-expire-time to define after how many milliseconds the plugin will appear again.  Create and edit your intelligent popup as easy as creating an emotion world. You don’t need any expensive agency to do the job. You can simply create a beautiful popup by your own.

Overview about the features

You want to place a product or a discount prominently on your site? With our popup plugin you are able to create your own custom popup plugin effortlessly throughout the emotion world creatore. Simply create an emotion world for your popup, insert elements via drag&drop like a banner with your individuell design. Define the size of your popup for every common screen resolution. Furthermore you can edit things like padding, boarders, shadows, cookie-expire-time, start delay time and many more. Use the power of our popup plugin to make your own, individuell popup without advanced programming knowledge!

Do not hesitate to contact us if you need help with one of our plugins.
alphanauten Gmbh & Co. KG
Gürtelstraße 9
59423 Unna
Germany
MAIL technik@alphanauten.de
Reviews 7
Read, write and discuss reviews... more
Close menu

Everything that we were looking for!

We were looking for a pop-up plugin to make different announcements on our site. Hence, we found this plugin, which didn't work 100% in the beginning. However, the support team of alphanauten was very helpful and immediately adjusted the plugin so that we could use it as well with our custom frontend. We shared our idea that we would like to show the pop-up during checkout, hence, the support team immediately listened to us and did their magic and now we are able to make beautiful pop-ups for the checkout. Last but not least, they told us that they are working on many more new features, which we also had in mind and shared with them for more flexibility and even more functionality.
We definitely recommend this plugin!

1. Click on [marketing -> emotion world] after installation.
2. Choose an Emotion world or create a new one and edit it.
3. Activate the checkbox under [settings -> basic settings -> popup]
4. Now a new tab called popup-settings should appear where you can edit the configuration of your popup.
5. Click on the save button in the bottom right corner to complete your settings.
The selected Emotion world is no longer displayed as a regular Emotion world but opened as a popup

If you have any problems with our plugin don’t hestitate to contact us.
alphanauten GmbH & Co. KG
Gürtelstraße 9
59423 Unna
TEL 02303 9295000
MAIL technik@alphanauten.de

Feature: Customer streams can be used to restrict popups.

Feature: It is now possible to show popups on the account dashboard.

Bugfix: The "slide right" animation had a problem displaying the popup.

Bugfix: Fixed a bug while changing size in shape default.

Bugfix: Images were not compressed enough.

Bugfix: The popup page restriction cannot be changed for one single popup.

Bugfix: Fixed an error occurred while attempting to update the plugin.

Links, which are opend in the same window create a cookie.The popup will be hidden as long as the cookie is not expired.

Bugfix:Fixed error that prevented the close button to display while using digital publishing elements within the popup.Feature: popup is now closeable by clicking outside of the popup

Fixes error within the layout modes resize and fluid

Deprecated:Removed height settingHeight calculates from element height or count and height of rows depending on layout mode

Fixes a bug that occurred after deinstalling the plugin.

(12)
Banner for Notifications, Notes & Offers by Zenit Design
Offers, sales, promotions, holiday news, information and much more. can optionally be displayed as time-controllable banner including linking & with integrated text slider.
€ 29.00*

(17)
Layer for individual advertising - InfoLightBox by Net Inventors GmbH
With the help of the "InfoLightBox" plugin, your content appears on the start, category & article detail page in the visitor's focus above the actual content.
from € 9.00*

Cross-selling in shopping cart by BuI Hinsche GmbH
With this plugin you can animate your customers to buy even more. The products you have defined in advance (similar products or accessories) are displayed in the shopping cart.
from € 10.00*
BUNDLE

(3)
DAS Popup / Popup or Exit Intend Lightbox for... by WebdesignHamburg.net
Versatile PopUp Plugin to create a lightbox based popup advertising for shops. you can use it for special offers, subscription forms or advertisement.
from € 8.00*

(1)
Billing and shipping addresses on documents by Web Loupe
With this plugin, the invoice and delivery address can be displayed on your documents. Supported documents: Invoice, Delivery note, Credit Cancellation
from € 4.50*

Display Article Stock Features I Badges by BrandCrock GmbH
Show article stock level to end-customer in the form of bar. This bar is multi-color bar. Stock indicator bar displays on the listing page for each product and for variant products.
€ 29.00*
BUNDLE

(2)
FAQ Manager I FAQ & Article Detail page by BrandCrock GmbH
This plugin bring important Questions & Answers in one place but also arrange them into Categories. Customers find specific information and/ or FAQs with ease.
€ 74.99*

(2)
Generate Popups by 426agency
With this plugin you can create popups for every page or for a single page using Shopping Worls in just a few minutes. The popups (the global and the single pages) can be customized
from € 4.00*

(3)
DAS Popup / Popup or Exit Intend Lightbox for... by WebdesignHamburg.net
Versatile PopUp Plugin to create a lightbox based popup advertising for shops. you can use it for special offers, subscription forms or advertisement.
from € 8.00*

Exit Intent Popup by STUTTGART MEDIA GmbH
Convince your visitors, if they intend to leave, with coupon codes or any other content you want to be displayed in a layer over the contents of your page.
from € 7.00*

Exit Pop-up by CREHLER
It's commonly known that the buying process is often canceled. The customers are sometimes not sure, if they made the right choice. On the other hand, there are many visitors that simply leave the store without performing any action....
€ 29.00*
BUNDLE

Generate Popups by 426agency
With this plugin you can create popups for every page or for a single page using Shopping Worls in just a few minutes. The popups (the global and the single pages) can be customized
from € 4.00*

Popup for emotion worlds by alphanauten - Agentur...
Finally, you can create custom pop-ups for your shop, and easier than ever. These pop-ups are built like a emotion worlds and easy to configure. Test it by yourself.
from € 39.00*