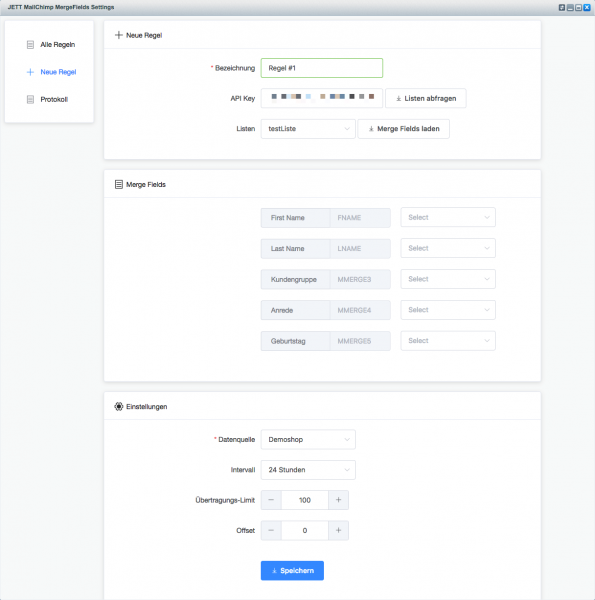 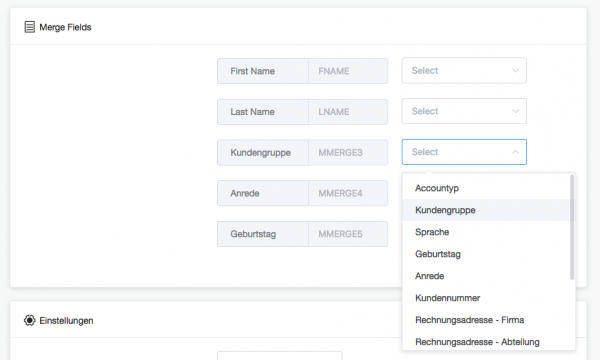 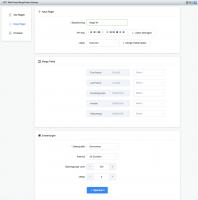 After purchasing this plugin, you will have improved options for using Mailchimp for sending newsletters.

The plugin supports the transmission of the following information from Shopware to MailChimp:

Do you have questions about the plugin? Then take a look at our manual or write us an e-mail to: support@mc4sw.de

-  With certain server configurations it could happen that existing rules were not executed.

- The plugin supports the english language now.- Several optimizations in the settings screen.- Improved synchronization of the birthday field.

- A new option can be selected to prevent combination of customer streams.- The synchronization has been improved.

- Bonus points created by the plugin "Bonus System" can be transferred to MailChimp.- Compability fixes for PHP 7.2

- We improved the synchronization, especially for Shopware 5.2.x

Custom fields can be selected for synchronization.

- It is now possible to transfer the customer streams of a customer into a merge field.

The plugins loads all merge fields from MailChimp.

- New data resources have been added:-> Billing address country-> firstname-> lastname
- An error which could occur during synchronization has been fixed.

First initial version of the plugin

(1)
Mailchimp Newsletter Synchronization by Torben Tschechne und...
Synchronize all existing and future Newsletter subscribers to Mailchimp. The plugin has many options to fit all your needs. Additionally it supports GDPR Forms.
from € 29.00*
BUNDLE

(7)
MailChimp e-Commerce Synchronisation by Torben Tschechne und...
Select and transfer shop contents such as customers, products and orders to Mailchimp and make use of Mailchimp's e-commerce functionalities to boost your sales.
from € 45.00*

(1)
Customize the blog layout by Code 108
With this plugin you can customize the appearance of your blog and adjust it to match the design of your shop. Choose from various appealing variants how your blog should look like.
from € 19.80*

(1)
VATID Validation PRO (SW5) by Shopdoktor by LENZ...
Validate your customers vat ids with our vat id validation plugin. This happens on every order and every address change that applies to your configuration.
from € 50.00*

(13)
Instagram Emotion element by alphanauten - Agentur...
This plugin allows you to display content of instagram in your shoppingworlds. You have the choice between many different display settings like grid, slider and some others.
from € 29.00*

(1)
Repertus Runtime - The foundation of all our... by Repertus GmbH
Our free Repertus Runtime plugin is the basis of all our other plugins. It extends Shopware with important features and services that are used by all our plugins.
Free
Customers also viewed
BUNDLE

(7)
MailChimp e-Commerce Synchronisation by Torben Tschechne und...
Select and transfer shop contents such as customers, products and orders to Mailchimp and make use of Mailchimp's e-commerce functionalities to boost your sales.
from € 45.00*
BUNDLE

(1)
Mailchimp Newsletter Synchronization by Torben Tschechne und...
Synchronize all existing and future Newsletter subscribers to Mailchimp. The plugin has many options to fit all your needs. Additionally it supports GDPR Forms.
from € 29.00*

(1)
Mailchimp by Mailchimp
Mailchimp is a powerful marketing platform for your e-commerce business. Connect your Shopware 5 store to start sending targeted emails, ads and more.
Free

Mailchimp Newsletter Synchronisation by RAEN GmbH
New Newsletter Subscribers in Shopware are synchronized with Mailchimp in realtime. You can use Mailchimp do do your email marketing and collect subscribers from your Shopware shop!
€ 79.00*

(5)
Shopware Storytelling by shopware AG
The Storytelling Plugin allows guide customers’ through your shop with a compelling narrative.
Learn more

Canonical URL for categories by mkx
Let the Canonical URL of a category point to an arbitrary URL. Prevents duplicate content, especially useful when shops have the same products but different domains.
€ 19.00*