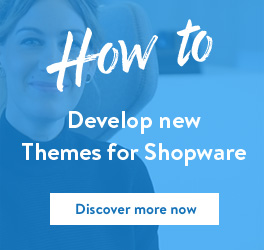 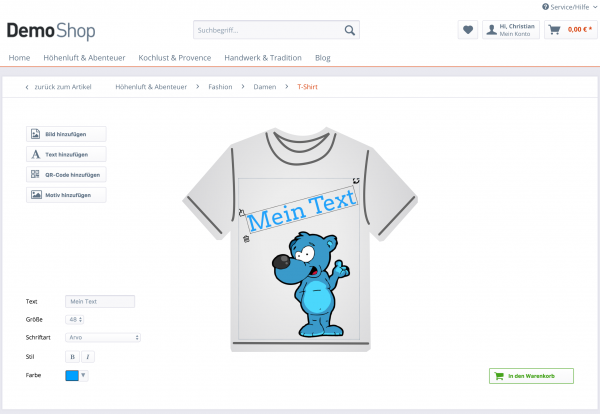 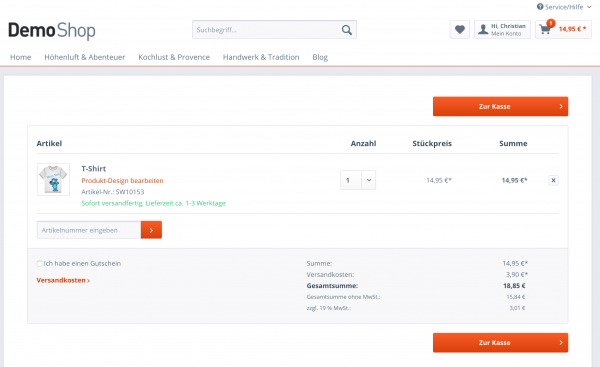 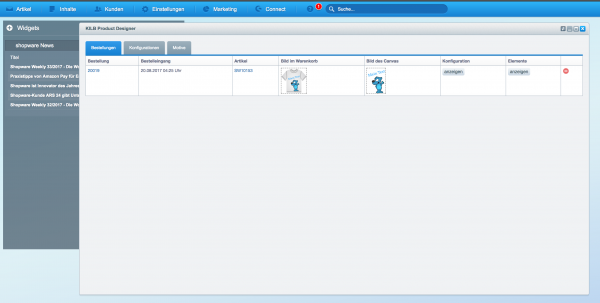 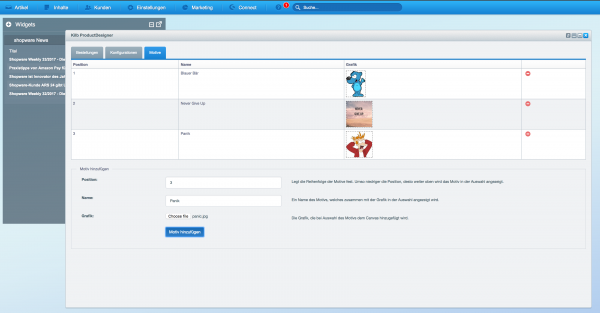 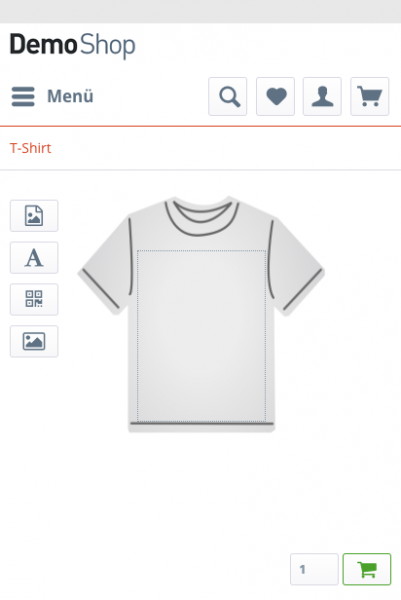 The KILB Product Designer gives your customers the opportunity, to create their own design for prodcuts like shirts, posters, banners, cups etc.

Before the product is added to cart, the customer can create an unique design. He is able to upload own images, create texts with several fonts, add QR codes or choose between a set of images you have predefined.

After the customer has added the product into the cart he already can see a preview image of the final product. When he completes his order, the plugin will automatically send the design as an PNG image via E-Mail.

When we developed this plugin we had focus on:

Customizability: Nearly everything (image solution, image size, print size, font size and much much more) can be configured by you. You can create as much configurations as you like - even  a single article can have several configurations if you like. Your product has a front and back side - but the back side has a smaller area and the maximum font size should not exceed 30? No problem! If you are able to code, this plugin can be the perfect fundament for your own, unique product designer. You can manipulate nearly everything via CSS, JS and PHP!

Performance: The Product Designer is based on a very fast JavaScript Framework "Vue.JS". Expensive algorithms like image generation or manipulation will only be done on the server side. So your customer's browser - even if he uses an old Android phone - will be fast and responsive.

Compatibility: The plugin is integrated into Shopware as much as needed. But it touches not a single line more of Shopware code than necessary. This will dramatically decrease conflicts with other plugins. Also - a lot of things the plugin does will be done on the server side. So the list of browsers and devices the plugin works with is very high.

Responsiveness: No matter if you use the plugin on yur phone, tablet or desktop. It will work always the same way. It's completely responsive.

- Product designs for each article and variant possible

- Highly customizable thanks to JavaScript and PHP event systems. There's a doc for developers if you want to know how it exactly works.

Fonts will be listed as a preview in the font dropdown.

If you've changed the directory of your fonts it's important to set the new public URL field for the fonts.

- Configuration data were added to the methods to upload images and generate canvas images - so it will be easier to extend the designer by custom implementations.

- In the dialog to choose a motive the images will be loaded as a thumbnail which will improve loading time.

- The list of motives in the backend also will show thumbnails which will improve loading time here as well.

- Lazy loading was implemented for motives in backend and frontend. Browser support is necessary.

- Improvement for Developers: Increase DI customization by prefering interfaces instead of class implementations for argument types.

- Canvas positions with the same order number will now be grouped by color to have a better overview.- Image extension of mail attachments will now be correctly PNG.

- Temporary model files will be reloaded now if you install or uninstall the designer. This will solve some issues with the Shopware cache.- If you generate a lot of variants you can now use the "configurator template" from Shopware to predefine product design configurations. So you don't need to update all the variants manually afterwards.- Bugfix: The method CanvasService::updateCanvasImagePath will now use the path adjusted by the event filter if there is one.

- Bug fix: E-Mails will be sent every minute now - even if the previous cronjob run stopped because of not yet finished canvas image generations. - Bug fix: In some cases there were issues by uploading the same pictures twice in Chrome and Chromium browsers- You can adjust the limit of line and word length now via event "limitText:options"- You can read out canvas image and basket image path from $imageData array in MailService::sendMail via the event thrown there.

- Variables for creating the mail template can be adjusted via events now
- Bugfix: Orders with cart discounts are working again

- When adding a configuration to an article the corresponding field will display configuration name and label now.- Remaining stock together with item quantity in basket will now be checked.- JS event createTextImage:arguments is working now.

- Bugfix: You are now able to delete canvas entries in backend again.

- Updated JavaScript Libraries like VueJS to version 2.5- Added new PHP Events to code of image generation- Input field for changing text will be focused after double click on text element now- Handle element to resize a canvas element will now be injected to text elements, too. You can make it visible via custom CSS to make text elements scalable.

- The initial position after adding an element to the canvas will be calculated by percent now. This fixes the issue that for very small canvas sizes elements will be placed outside of the visible area.

- Bug fix: If you rotate and scale an element on the canvas it could happen that the element was not placed on the correct position during image generation.

- When deleting a configuration you will be asked again if you really want to delete it.

- When a configuration gets deleted it will removed from the assigned articles, too.

- It's possible now to edit the template of the mail with product designs in the Shopware backend.

-It's possible now to set an initial text color in each configuration.

- It's now possible to customize the generated image paths of canvas and basket images via event subscriptions.

- HTML validation for form elements of the backend configurations is disabled now - so placeholders in URL fields are possible now.

- Click on edit in the table of configurations will now scroll to the expanding form of the corresponding configuration.

- Cronjobs that were aborting by an error will now automatically be started again after 1 hour - instead of never.

This update will improve the possibilities for customization of the designer.

- The current ID of the active configuration will be added as a HTML data attribute to the wrapper div with the ID #designer-component. This will make it easier to style the designer for different configurations if you use the same CSS file for several configurations.

- The basket image width can now be adjusted by subscribing to the event KilbProductDesigner_ImageService_GetBasketImageWidth_FilterResult.

- Now it's possible to set a maximum number of elements. The default value will be 10. You can change that value in your backend configuration settings.

- Configuration specific data will now be read out of the database when a user is adding a product design into the basket. This will avoid that a user can manipulate these data.

You can define in your configuration how many text lines a user of the product designer is able to write on.

- The initial font can now be set in the configurations.

- If there is no file for the initial font existent the first font in the list will be used.

- An issue was fixed that prevented e-mails from being sent.

- And issue was fixed that prevented images to be generated.

- Missing or corrupt installation of ImageMagick will display an error message now instead of just redirecting to home page.

- Plugin was successfull tested with Shopware version >= 5.4.0 and released for this version.

- All strings in the backend dialog of the Product Designer can now be customized via Shopware snippets.

A bug was fixed that caused an error message when loading an article that is not available.

- A bug was fixed that prevented the color picker for texts to work properly.

- The server path to the background image for the basket thumbnail needs to be defined in the configuration now. We won't use the image URL any more for image generation to prevent some issues with that.

- The configuration of the color picker to choose color for texts can now manipulated via JavaScript Events. See https://bgrins.github.io/spectrum/#options for configuration options.

- Bugfix: When switching configuration views on the designer, in some cases elements were moved unintentionally.

- Feature: In the plugin configuration you can device if canvas graphics should be read by URL or server path

- Bugfix: Switching between configurations will update their properties again.

- Bugfix: The link "Produkt-Design bearbeiten" in the basket won't be displayed anymore if a basket item doesn't have a product design.

- Bugfix: Motives with different size won't break the layout of the dialog anymore.

- Bugfix: Date in backend will be formatted in 24h format.

- Bugfix: Canvas images will be generated if there is no email address configured.

- Bugfix: All canvas images will be generated if there are several configurations assigned to a single product.

- You're able to leave the email recipient field in the configurations empty now. No email will be sent then.

- A bug in one of our templates was fixed that removed the quantity input field for articles without product design.

- Emails weren't delivered after an order with product designs has been made. This is fixed now.

- The buttons to change configurations (e.g. front side / back side) have been (better) optimized for mobile devices.

- The icon to resize elements on the canvas has sometimes being shown when element weren't focused. This is fixed now - so the icon is only visible if it's element is focused.

- There were several smaller issues on some devices when manipulation elements on the canvas. These issues have been removed, too.

- The generation of text on the canvas should be a bit faster now. We've fixed some generation issues when generating very large text with big font sizes, too.

(1)
KILB Hide Articles by KILB Software Development
Active articles can be hidden in Frontend (search, categories...), but still are available via URL. A hidden article will ne be visible in the Frontend anymore.
from € 4.99*
Responsive

Advanced menu with graphics + customization by huebertweb
Expand your menu with your own icons or graphics and customize it.
€ 10.00*
Responsive

14 flexible Social Media Share Buttons by BÜRO FÜR DIGITALEN...
Different Share-Buttons per Device (e.g. SMS and Whats App only on mobiles, Email only on Desktops) and absolut full control over the design with CSS.
€ 15.00*
Responsive

(7)
FAQ for SEO by huebertweb
FAQ's with own URL per question and own metadata as shopping world element. Group can be assigned to an article (as a separate tab). Urls are included in Sitemap.
from € 6.00*

(17)
Product Configurator by Borucinski Grafix
Personalization of products, the sales booster for Shopware stores of tomorrow. Depict dependencies and generate millions of variants. Fast, modular and flexible applicable.
from € 50.00*
Responsive

(1)
Designer by Borucinski Grafix
Product Configurator Addon for simplified, fast design and visualization of products such as print products, foils, textiles and all kinds of promotional items.
from € 40.00*

(15)
Custom Products by shopware AG
Fulfil your customer’s desire for personalised products with the “Custom Products” Premium Plugin.
from € 30.00*

(67)
ThemeWare Modern | Customizable Responsive Theme by TC-Innovations GmbH
With ThemeWare® you decide upon an extreme customizable and sales-promoting responsive Shopware Theme offering you a large range of functions in addition.
from € 39.00*
Responsive

(1)
KILB Hide Articles by KILB Software Development
Active articles can be hidden in Frontend (search, categories...), but still are available via URL. A hidden article will ne be visible in the Frontend anymore.
from € 4.99*
Responsive

(5)
Parametrix by Borucinski Grafix
Configurator Addon: free parameter definition. Length calculation, area calculation, volume calculation. Any number of parameters and calculations with your own formulas.
from € 30.00*
€ 499.00 *