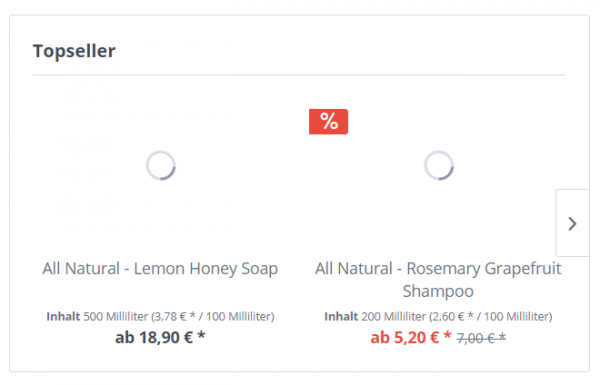 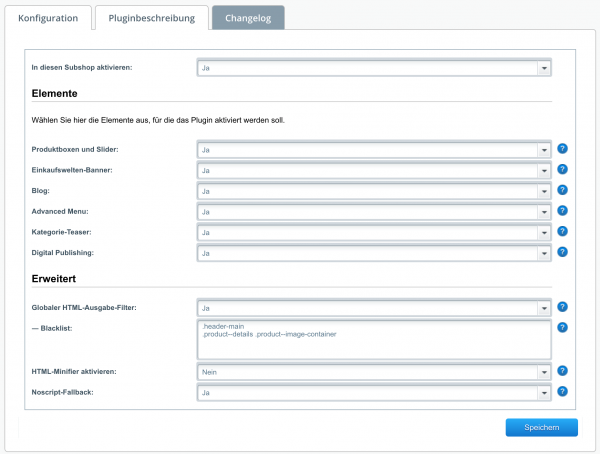 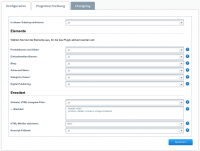 Description Reviews 2 Installation manual Changelog
Description
Lazy loading will load images only when they are really needed. Images that are not in the... more
Close menu

Lazy loading will load images only when they are really needed.

Images that are not in the user's field of view will not be loaded until the user has scrolled close to it. This avoids unnecessary network activity and improves the page speed.

This can also have a positive effect on the search engine ranking, since the loading speed is also a factor here.

Things the plugin cannot do

This plugin has been developed for the default Shopware 5 installation. If you are using additional plugins or a different theme, please make sure to test the plugin first before buying. You can use the free test license for this.

Are you missing a feature or do you have suggestions to this plugin?Feel free to contact me via the following email if you have any questions: info@metaroom.net

If you are using a ThemeWare theme:

- Bugfix: HTML Minifier within ESI / Widget Includes did not work (only Shopware versions smaller than 5.6)

- New: Text & code elements in the shopping worlds can now optionally be deactivated

- Bugfix: In some themes, the loading animation was displayed twice over product images

- Bugfix: Fixed a bug related to a smarty error in the backend preview

- Bugfix: Plugin is now always deactivated in the backend preview

- New: Images in the content type listing are now supported

- Bugfix: HTML loaded via AJAX is now also captured by the output filter

- Fixed problems when deleting the plugin

- URL blacklist added: The HTML filter can now be disabled under certain URLs (e.g. only in checkout)

- Dependencies have been updated

- Bugfix: Placeholder images were sometimes too large, which could cause the page to "jump" after loading some pictures

- New option "Expand value" added: Can be used to specify how early images are loaded

- Bugfix: The height of banner sliders were sometimes displayed incorrectly if they contained unloaded images (überarbeitet)

- Bugfix: The height of banner sliders were sometimes displayed incorrectly if they contained unloaded images

- Bugfix for problems after installation

- Bugfix: Images in tabs were sometimes not reloaded after changing variants

- Bugfix: Fixed a bug that caused some images in banner-sliders to not load

(9)
Breadcrumb Extension by coolbax
Show the subcategories on mouseover on the breadcrumb, delay time can be easily adjusted in the backend, breadcrumb is optimized for Google (rich snippets)
Free

(9)
Smart search by shopware AG
Make every product in your shop findable, even with typos, incomplete entries etc. Increase the successful searches of your customers and increase their satisfaction.
from € 30.00*
Self-Hosted

(1)
Optimized Infinite Scrolling by Tanmar Webentwicklung
The plugin extends the Shopware infinite scrolling feature. It adds a progress bar which shows how many products are in the category and how many have already been displayed
from € 4.00*
Self-Hosted
BUNDLE

CLS avoidance through width and height for the... by Tanmar Webentwicklung
With this plugin you define a fixed size for the shop logo. In this way you can avoid layout shifts and improve the CLS rating measured by Google in Pagespeed Insights.
from € 1.50*
Customers also viewed

(3)
Lazy-load offscreen images by Maxi Arnicke
Lazy loading will not load images until they are really needed and visible to the user. This will avoid unnecessary network activity and improve the page speed.
from € 4.99*

(3)
Lazy Loading by isento eCommerce...
Lazy loading loads small icons instead of the actual images in the hidden area of the web page. The images will be loaded, when the user gets to the hidden area.
from € 3.49*

(1)
Native Lazy Loading without JS by Nimbits
Native lazy loading for images in shopping worlds and article listings without using JavaScript. Low rendering times & loading times for your customers.
from € 4.00*

(2)
ThumbnailProcessor incl. Lazy Loading by Friends of Shopware
Don't waste the computing power and space with thumbnails! Have the thumbnails generated and delivered in real time when you visit an external service.
Free
Self-Hosted

(5)
Image optimization, compression, WebP, CDN... by intedia GmbH
By using our module, the images in your shopware store are automatically delivered parallely in a compressed and optimized format like WebP via our service.
Free