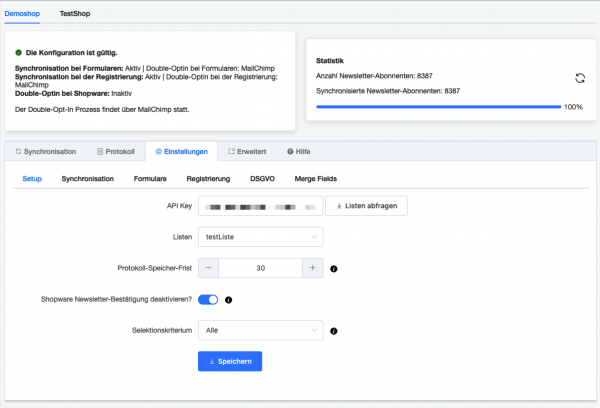 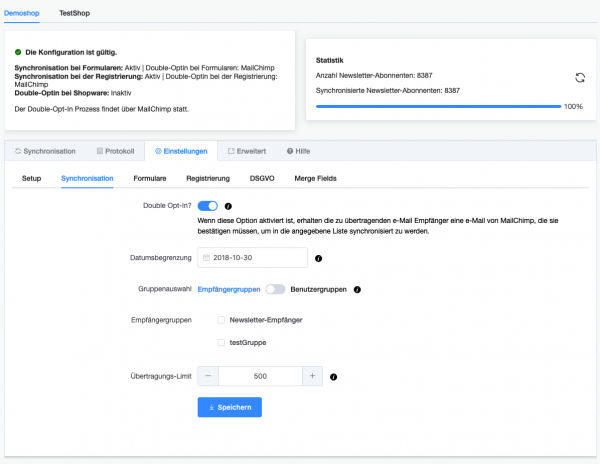 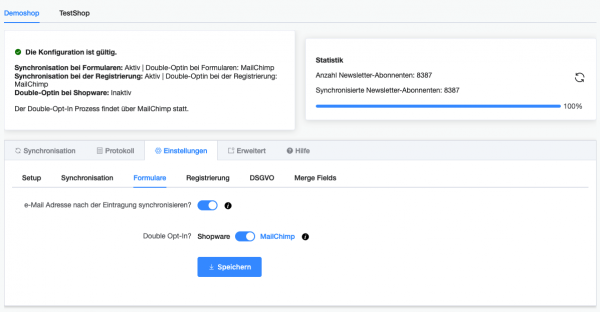 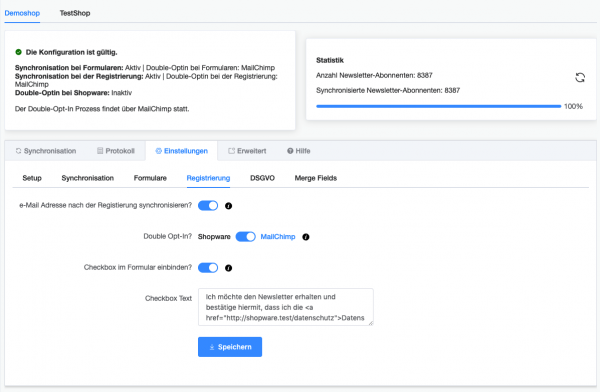 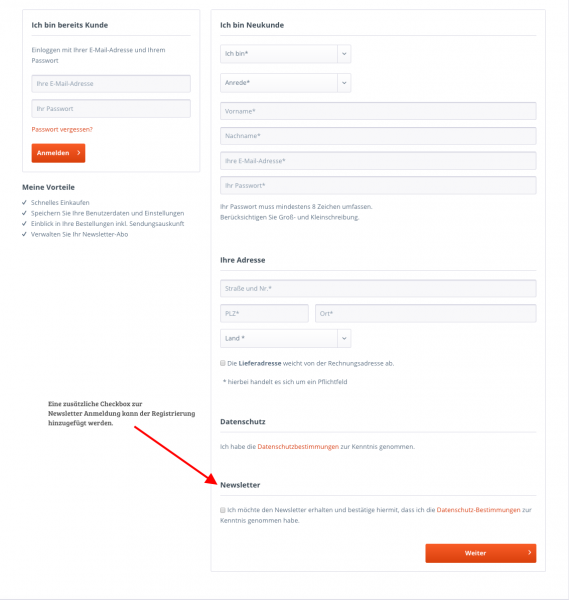 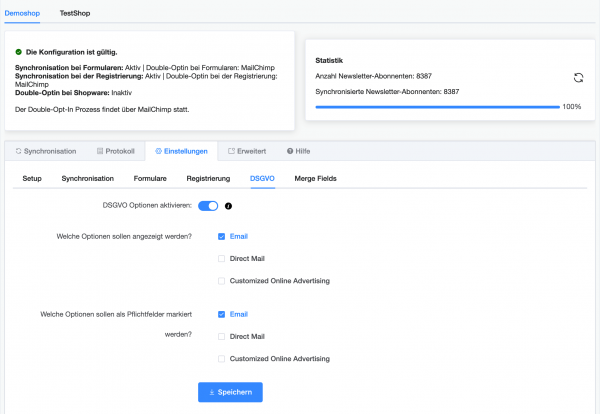 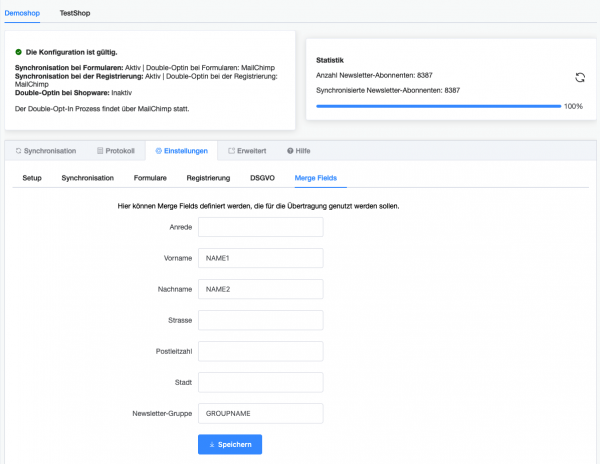 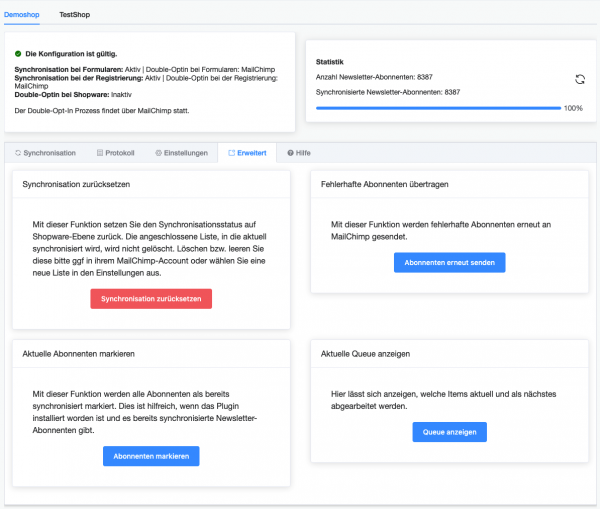 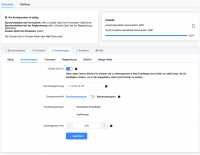 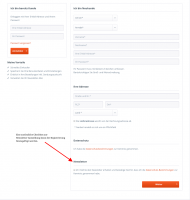 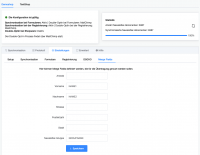 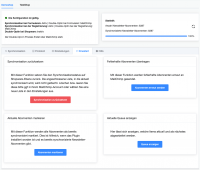 Not available
This extension cannot be used in a Shopware Cloud shop. Cloud Self-hosted
1 Bundle available To the free trial options

Description Reviews 1 Installation manual Changelog
Description
After purchasing this plugin, you will have many options for using Mailchimp better in the... more
Close menu

After purchasing this plugin, you will have many options for using Mailchimp better in the future for sending newsletters.

To start, you can transfer existing newsletter subscribers from Shopware to Mailchimp. After installation and configuration, you can synchronize forms, register customers directly for the newsletter during registration, and define merge fields to add additional information.

The Double-Opt-In process can be done either via Mailchimp or via Shopware, the synchronization to Mailchimp takes place in both cases. If a newsletter subscriber unsubscribes from Mailchimp for your newsletter, it will also be updated in your Shopware installation. You can plan your campaigns in peace and you do not have to worry about synchronizing your subscribers anymore.

This plugin is multi-shop capable, which means you can create your own configuration for each SubShop.

Form Synchronization
With this setting, all newsletter subscribers, e.g. in the Shopware footer, in the customer account and during checkout will be automatically synchronized to Mailchimp.

Merge Fields
Define merge fields to be transferred to Mailchimp. In the initial setup, no setting must be made here, the first name is synchronized in FNAME and the last name in LNAME.

Support
Do you have questions about the plugin? Then take a look at our manual or write us an e-mail to: support@mc4sw.de
Reviews 1
Read, write and discuss reviews... more
Close menu

Installation:1. After purchasing our plugin, install and activate it in the Shopware backend.
2. Reload the backend and activate the CronJob "MailchimpSubSyncQueue" with an interval of 10-15 minutes.
3. Go to Settings -> JETT Mailchimp Subscriber Sync
4. In the window that opens, you can find all the plug-in settings. Select your shop and insert your API key. Then conveniently load your Mailchimp lists and select the list you want to use for each shop.
5. You can specify in the settings whether the Double-Opt-In process should take place either via Mailchimp or via Shopware. If the DOI process is to be done via Mailchimp, you should deactivate the Double-Opt-In e-mail, which may have previously been sent via Shopware under Settings -> Basic Settings -> E-Mail Settings (see Shopware 5.5) configure this option under Settings -> Basic Settings -> Privacy) and the DOI Mail with Mailchimp. You can find the settings by clicking Signup Forms -> General Forms -> Opt-in-confirmation email in the selected list in Mailchimp. These options are only visible if the option "Enable double opt-in" is also activated for the selected list under Settings -> List name and defaults.
6. A colored status indicator in the plugin informs you if your settings are set correctly.
It is no longer necessary to search the List ID with difficulty at Mailchimp!
After saving, you can continue with the other settings. For each setting there are help texts that help you with the configuration.
An even more detailed documentation can be found here: https://mc4sw.de/docs/newsletter
Changelog
more
Close menu

- An improvement in a cleanup routine was implemented

added a snippet to the save button

- The presentation in the "Data" tab has been improved.

- Frontend templates have their own blocks now

- There is now a data tab that makes it easier to see which data has been synchronized.

- The synchronization to Mailchimp has been improved.
- Entries that have not yet been processed can be deleted in the plugin window.

- Occasionally, a connection problem has occurred in setting up the GDPR lists. This has been fixed.

- Improvements in the HTML template of the GDPR lists were implemented.

- NEW: Mailchimp's 'GDPR Forms' are supported and corresponding checkboxes can be integrated in the Shopware Frontend without template modification.

- Various improvements have been implemented.

- The plugin has been translated to english.- The newsletter group can be transferred to Mailchimp.- Several performance optimizations

- The synchronization has been improved

- The synchronization process has been improved

- Fixed a bug that caused troubles during saving.

- The Double-Opt-In process can be deactivated.

- Feature: DOI process can be handled via Shopware or MailChimp- Usability fixes

- The salutation of "mr" and "ms", defined by Shopware can be changed.

The compatibility with Shopware Version 5.4 has been improved.

1. If somebody unsubscribes in/via MailChimp, he/she will also be unsubscribed in Shopware. 2. Besides sNEWSLETTERCONFIRMATION, the email sOPTINNEWSLETTER will be surpressed as well. 3. Some minor changes.

The selected language will be transferred to MailChimp.

We improved the functionality to sync customer groups.

- The logging functionality has been improved and shows technical messages as well.

- There is a new setting that clears the log automatically.
- The documentation has been improved https://elbsurfer.gitbooks.io/jettmailchimpsubscribersync/content/

- A few changes that improve the functionality.

- The option to sync customers has been removed. If you are interested in syncing customers, please take a look at our other plugin: http://store.shopware.com/jett867819383557/mailchimp-e-commerce-synchronisation.html
- You can now choose between receivergroups and usergroups when selecting the synchronization parameters.

- We implemented a function that can mark all subscribers as being already synchronized.

- The statistic has been improved and shows all synchronized subscribers.

- There is a new option that prevents the e-Mail "sNEWSLETTERCONFIRMATION" from being sent.

- A compability issue with shopware versions < 5.2.7 has been fixed.

The plugin just got two new functions:
- The synchronization can be reset on shopware level.
- Failed subscribers can be resend to MailChimp.

- Sometimes customers have been synced twice when the register option was activated.
- Sometimes, the plugin missed to mark successful synced newsletter subscribers as successfully transferred.

Fixes an issue with the plugin settings

First initial Release of the plugin

(7)
MailChimp e-Commerce Synchronisation by Torben Tschechne und...
Select and transfer shop contents such as customers, products and orders to Mailchimp and make use of Mailchimp's e-commerce functionalities to boost your sales.
from € 45.00*
Self-Hosted

(9)
Smart search by shopware AG
Make every product in your shop findable, even with typos, incomplete entries etc. Increase the successful searches of your customers and increase their satisfaction.
from € 30.00*

(16)
SEO redirects (301 and 302 redirects) by STUTTGART MEDIA GmbH
Redirect visitors and search enginges from old URLs to the new contents in your shop automatically. Create and manage redirects in the Shopware backend. Including CSV import and export.
from € 10.99*
Self-Hosted
BUNDLE

(7)
MailChimp e-Commerce Synchronisation by Torben Tschechne und...
Select and transfer shop contents such as customers, products and orders to Mailchimp and make use of Mailchimp's e-commerce functionalities to boost your sales.
from € 45.00*
Self-Hosted

(1)
Mailchimp by Mailchimp
Mailchimp is a powerful marketing platform for your e-commerce business. Connect your Shopware 5 store to start sending targeted emails, ads and more.
Free

Mailchimp Newsletter Synchronisation by Torben Tschechne und...
Automatically synchronize all existing and future newsletter subscribers in Shopware to Mailchimp. Easy setup and automatic synchronization to keep all subscribers synchronized.
from € 29.00*

Mailchimp Newsletter Synchronisation by RAEN GmbH
New Newsletter Subscribers in Shopware are synchronized with Mailchimp in realtime. You can use Mailchimp do do your email marketing and collect subscribers from your Shopware shop!
€ 79.00*
Self-Hosted
BUNDLE

(6)
Smart Newsletter by shopware AG
Personalize your newsletter and increase your conversion rate. Send individual and perfectly tailored newsletters to your customers.
from € 30.00*
Self-Hosted

(5)
Newsletter2Go E-Mail Marketing Integration by Sendinblue
The Extension for Shopware automatically synchronizes all newsletter subscribers, including basic data like name and gender as well as the total amount of sales and average sale. Choos
Free