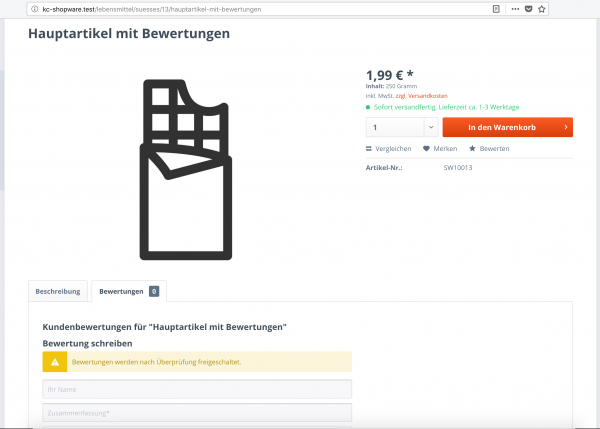 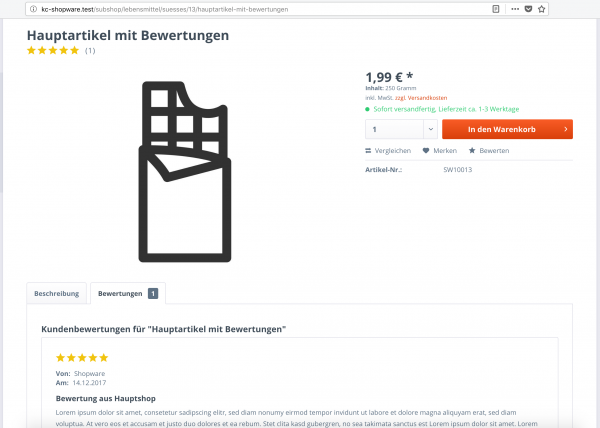 Description Reviews 0 Installation manual Changelog
Description
Since Shopware 5.3 there is the possibility to decide whether a subshop should display the... more
Close menu

Since Shopware 5.3 there is the possibility to decide whether a subshop should display the article ratings of all shops or only the ratings that were also given in this subshop. This can be used, for example, to prevent reviews from being displayed in the wrong language when using subshops with different languages.

However, this system is not very flexible and does not, for example, take into account the possibility of displaying the valuations of several subshops, but not all subshops. A typical example is the use of several subshops for Germany, Austria, Switzerland and other countries with other languages. Here one would like to have all german reviews displayed in all german shops, while the remaining shops should only display evaluations that have been entered in these.

Or you would like to display the ratings of an English subshop in all shops as well.

This Plugin solves this restriction very simply, in that one can determine for each individual Subshop exactly, from which Subshops the evaluations are to be issued.

Install and activate the plugin as usual using the Plugin Manager.

Afterwards you can select in the plugin settings for each subshop which subshops should be considered for the output of the ratings.

In order to only display ratings in the appropriate language for each shop, you could set the settings as follows:

(1)
Customize and replace flags and language... by blackpoint GmbH
Replace the flag selection in the header with a shapely contemporary menu. Decide for yourself which graphics and text you use, very simple, fast and easy!
from € 6.49*

(1)
Extended Article Rating Presentation (Average... by SIXMEDIA
Separate and clear presentation of the article ratings with average rating & rating preview. Improve the usability of your shop! .....................
from € 6.90*

Trusted Shops Reviews by KielCoding UG
Present your positive Trusted Shops® ratings strikingly and sales-promoting as a slider or individual element in your shopping worlds or as a slider at the end of each page.
€ 79.00*

Donation Penny by BFN...
With the donation penny, your customers can add an additional item to the shopping basket during checkout. The basic price of the item determines the amount of the donation.
from € 4.95*
NEW

EKW Banner+ by Machart Studios GmbH
This plugin enables you to create quickly and easily customized banners for your shopping worlds of your Shopware shop including texts, which do not have to be integrated in an image.
from € 19.90*

(1)
Blog for Shopware 6 by shapeandshift
The free open-source blog plugin for Shopware 6 integrates a blog functionality into Shopware including a block-style editor, which makes writing articles extremely easy.
Free

TAKO by TAB10
TAKO for shopware 6 is a multipurpose shopware template which can be use in almost every business field. Its a great startingpoint to build your own shop.
from € 21.75*