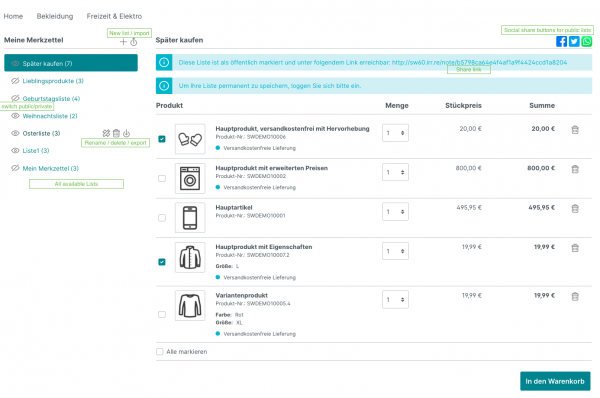 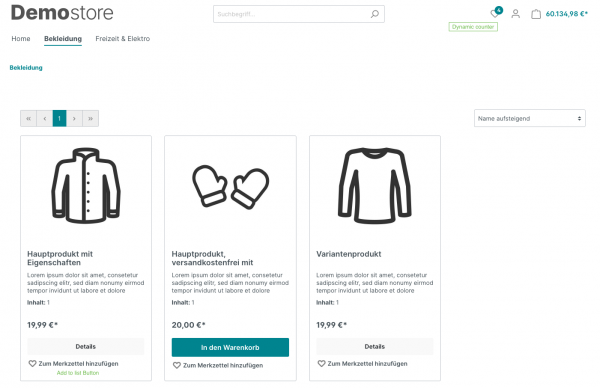 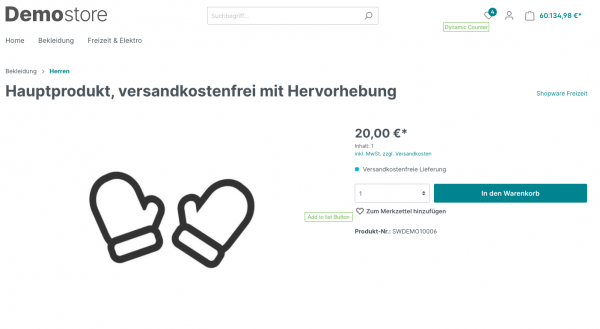 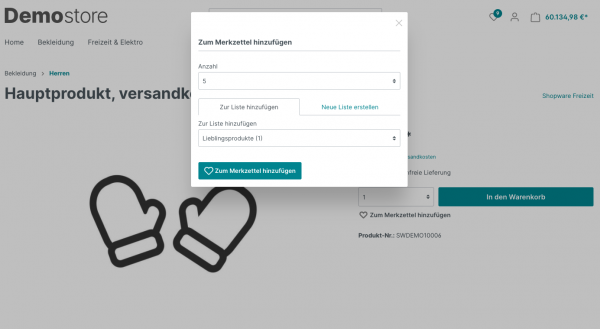 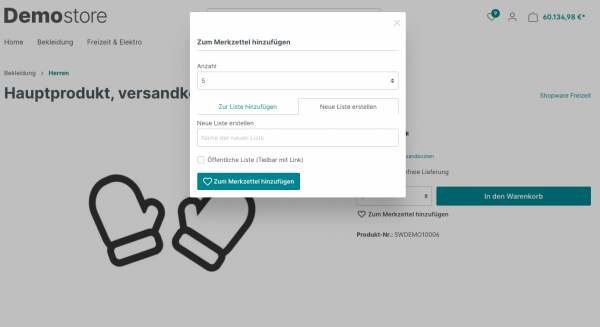 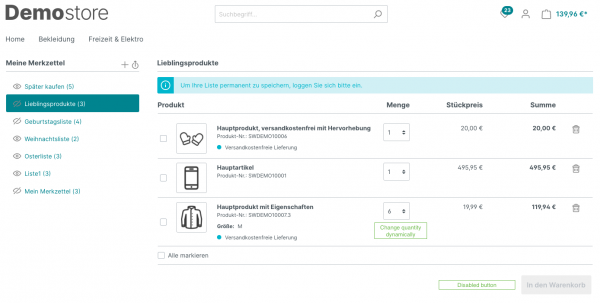 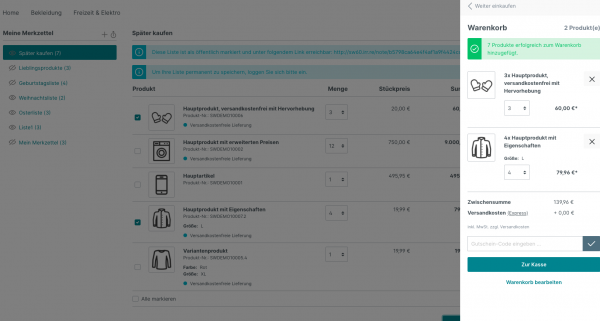 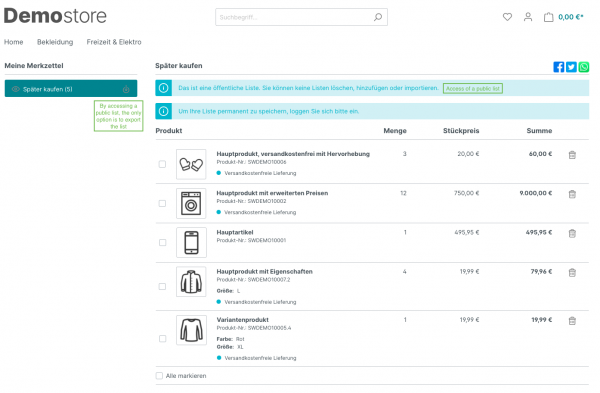 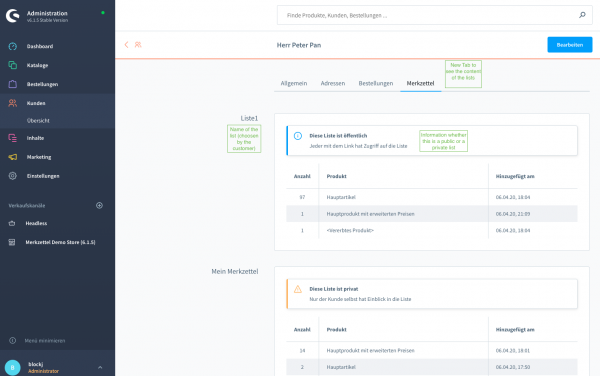 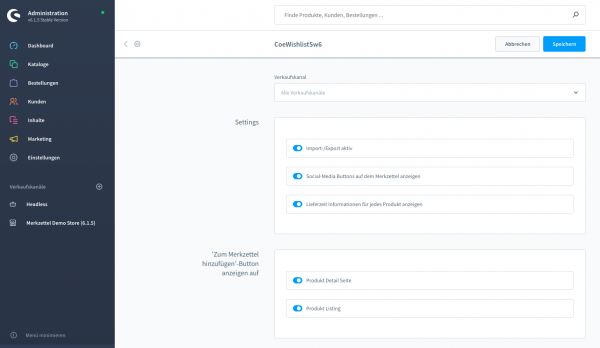 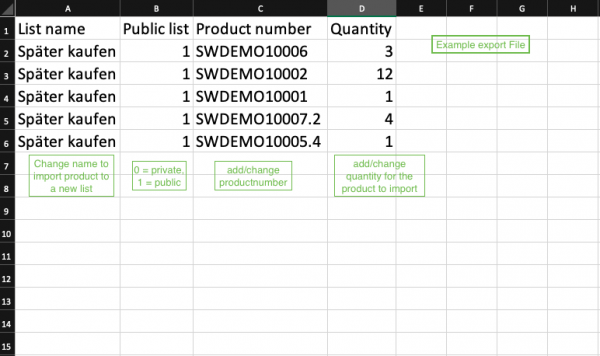 Not available
This extension cannot be used in a Shopware Cloud shop. Cloud Self-hosted
1 Bundle available App demo To the free trial options

This plugin extends the shopware6 functionality and puts Wishlists into it.

Shop-visitors can add products with the quantity to one or multiple list.

All lists which belongs to the current user will be displayed on an overview page.

From within the overview page, you can manage the lists (create, edit, delete) or add one or more products directly to the shopping-cart (1 click).

In addition this plugin provides an import/export functionality for each list which you can edit and import as .CSV file.

The administration area shows you which user have lists and which products are in them.

Perfect extension for either b2b or b2c customers. The wording (Wishlist, List, Notes, ...) can be adjusted within the translations.

Happy with our plugin?

Leave a rating, so other user will benefit from your experience. Thus we can hold up the high quality of our plugins.

Requests about the plugin will be handled via the Shopware Ticket System. Please create a ticket via your Shopware account, so we can help you as soon as possible.

You can find detailed documentation about our plugins on https://docs.codeenterprise.de.

- Fixes an issue within the importer. The issue causes that a new list is created even though there is already a list with the same name.

- Fixes an issue, that the note-list can not be loaded when there is a sold-out clearance product on it

- Hotfix: Fixes an issue, that under given circumstances the plug-in could not be activated due to an missing service

- Developers: The default note icon can now be adjusted by overriding the block 'component_wishlist_icon'

- Fixes an issue which occured when adding products out of a private list to the cart. Under given circumstances there was a chance, that a wrong quantity had been added to the cart

- New Configuration: Already added products can now be markes with a checkmark within the product-listing page

- Default list name is now configurable per language with a snippet: coe-wishlist.general.defaultListName

# 1.2.4
- Fixed a bug which occured when placing guest-orders

- Fixed the error which occures when a customer tries to register

- As up from this this version, shopware < 6.3 isn't supported

(1)
Configure Filters Individually Per Category by Smart Dato
The entire filter block can be hidden or personalized per category. It can be decided individually which properties to use as filter and which preset filters to show in each category.
from € 8.00*

(3)
Dealer and branch search with OpenStreetMap by moori
Show your visitors dealers and branches for your products. The addresses are visible on a map. This plugin is also suitable for other Points of Interest.
from € 29.00*

(16)
Form Building Kit Professional - Individual and... by moori
With this plugin you have the possibility to create individual forms. These forms support file uploads as e-mail attachment, captcha spam protection and database connections.
from € 39.00*

(1)
Display shop only after login by Kiplingi
Sales channels can be blocked. Customers can only access the shop after login and activation by the shop operator. Particularly suitable for B2B shops.
from € 18.00*

(2)
Wish List by RHIEM Intermedia GmbH
This plugin adds a wish list to your shop, which behaves similar to Shopware 5, but after logging in, the wish list of your customers is saved permanently.
€ 59.00*

Extended Wishlist by Pixup Media GmbH
The plugin "Extended Wishlist" for Shopware 6 allows your customers to create different types of wishlists, share them with others and save them at a later date.
from € 19.90*
Customers also viewed

(2)
Vouchers, purchase vouchers & coupons - EasyCoupon by Net Inventors GmbH
Individual vouchers to give away, general vouchers as a campaign - with our plugin EasyCoupon you now have full freedom in creating vouchers in Shopware 6.
from € 39.00*

(2)
Wish List by RHIEM Intermedia GmbH
This plugin adds a wish list to your shop, which behaves similar to Shopware 5, but after logging in, the wish list of your customers is saved permanently.
€ 59.00*

Extended Wishlist by Pixup Media GmbH
The plugin "Extended Wishlist" for Shopware 6 allows your customers to create different types of wishlists, share them with others and save them at a later date.
from € 19.90*

Shopping lists / memos for your customers by gb media
With this plugin, your users can create and manage shopping lists. All products in a shopping list can be transferred to the shopping cart with one click.
from € 4.50*

(4)
Price on Request by Nimbits
With the plugin price on request, customers can request an individual price for the shopping cart. The plugin is of course DSGVO compliant. Further features will follow in the future.
from € 18.00*